By:
Mati Nõmmiste Follow on LinkedIn
This year’s study revealed that only 31% of executives around the world are female.
Contents

Readers who clutched their head upon seeing the headline thinking that this would be yet another lament about how women lack equal opportunity with men in the (business) world, and a call for those equal rights, will have been misled.

It’s true that studies show that the share of women executives is significantly lower than that of men in senior management. The international business advisory network Grant Thornton has been conducting research on this topic for 17 years, and the results show that the number of female executives has gradually grown each year, but this year’s study revealed that only 31% of executives around the world are female. In the European Union, the figure is slightly higher – 34%.

Read more about the 2021 report

Why aren’t women in leadership positions?

There’s no end to the reasons that have been proposed. Here are just a few thoughts. One: women don’t even want to be in senior management because of the high workload and responsibility; they’d prefer to devote themselves to their families. Two: the male-centred business world doesn’t trust women and selects people who are like themselves. Three: women are more reticent and not as self-confident in their abilities as men. I can cite an example of women’s reticence from our own company: in a 360-degree feedback survey, women’s self-ratings were lower than the ratings their supervisors and co-workers gave them. Four: if a woman wants to become an executive and start from a mid-level manager position, she’ll find it difficult to get there. That’s what a McKinsey study found: for every 100 men promoted to mid-level manager or recruited from outside the organization, only 72 women are promoted and hired.

Does the question only come down to the low number of female executives?

On International Women’s Day, it’s fitting to focus on women, but if we think back to the reasons stated above and replace the word “woman” with the words “young”, “old”, “non-Estonian”, “disabled person” – could we really say that those social groups find that their own path to self-actualization is free and clear? Probably not. Yet diversity is the foundation of a successful organization poised for growth, the underpinning of strong walls in the form of people of different ages, genders and ethnicities.

It’s the job of every organization’s leader to create an organizational culture where everyone has equal opportunity and no one faces discrimination. Think for a second about whether your organization offers all talented people, regardless of gender or age, equal opportunity to develop and climb the career ladder? What takes place in recruitment – do you treat all candidates as equal? The coronavirus has made flexible hours and remote work an inevitability, but would you have done the same had the crisis not forced you to?

I think our goal should be to improve the running of Estonian organizations, because that will also better their performance. It’s especially important in the current fragile economy. A keyword when it comes to improving management is diversity. That means key positions from the standpoint of an organization’s development could be occupied by people with a different mindsets, of different ages, as well as different ethnicities and genders.

For 17 years, Grant Thornton has been tracking the global progress of women in senior management. In the last 12 months, unprecedented events have had an unforeseen impact on that progress. 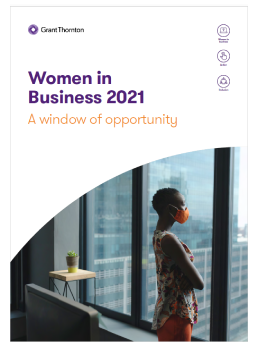