The case in question is a telling reminder as to why one cannot only stake one’s hopes on international tax law principles, and why any assessment of the tax effects of trans-boundary transactions should also consider the local tax law of the specific country and rely on specialists with knowledge of case law.

The court case pertained to the application of the double taxation treaty between Germany and Turkey. It concerned a German engineer who worked in Turkey in 2004. Based on the double taxation treaty in force, the person’s income appeared to be exempt from tax in Germany. But due to additional rules introduced in German domestic law, the German tax authority and a domestic court decided to override the provisions of the tax treaty and subject the Turkish earnings to German income tax.

Decision of the Federal Constitutional Court of Germany

The Constitutional Court found that the restrictions established by domestic law with regard to application of tax exemptions in the double taxation treaty were permissible under the German Constitution. In providing reasoning for its decision, the court argued that double taxation agreements and local income tax law have equal priority. Thus, if a legal conflict arises, the national law takes precedence if it was (A) adopted later (lex posterior derogat legi priori) or (B) includes more detailed conditions for applying tax relief (lex specialis derogat legi generali).

What does the decision mean for the Estonian business community?

In the German case, this court decision legalizes all additional later or more specific statutes established in German national income tax law and the precedence of such rules over the tax relief and exemption granted by tax treaties (even if the tax treaties lack such conditions). This situation will mean that all potential national statutes must be analysed prior to assuming relief or exemptions under German tax treaties. Examples include the reduction of the income tax withholding rate when paying dividends and licensing fees from Germany or a tax exemption on income tax on certain types of income categories (active vs passive) earned in a permanent business establishment in Germany.

In general, the situation has broader implications for complexity of taxation of cross-border transactions. Knowledge of international tax law is not enough; rather, for assessing specific impacts and finding a solution to a problem, close cooperation with competent advisers in other countries will be necessary as well.

Thanks to a network spanning the globe, Grant Thornton Baltic has access to international know-how, allowing customers to reduce tax risks from operating in foreign tax environments. If you have questions, please contact our tax department at +372 626 4500 or via email tax@ee.gt.com. 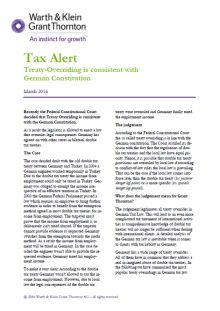