Businesses both in and outside Estonia are very optimistic about this year’s outlook. But I recommend taking the rose-coloured glasses off and committing to making investments this year in order to improve effectiveness. Otherwise, 2018’s celebratory mood might be followed by hangover in 2019.

The latest study conducted by Grant Thornton among businesses in 35 countries shows that this year companies expect turnover and profit to grow, and they are planning more investments than before and raising the prices of their goods and services. For example, 36% of the companies surveyed are planning to raise prices in the next 12 months.

Some 40% of companies are planning to hire new personnel this year. That’s the highest figure in recent years. There are several hidden rocks lurking in the active recruitment work. First of all, there is a workforce shortage problem both in Europe and on the other side of the pond and that is leading to bidding salaries upwards, which in turn is expressed in a rise in the price of goods and services. Secondly, the increase in the number of employees is the easiest and simplest way to meet growing demand, but we should think about improving effectiveness as well. There are no easy and quick possibilities – there must be investment into equipment and machinery and research and development.

Thus I advise companies to think about the long term instead of counting on short-term solutions, and dedicating 2018 go making investments – if they don’t, this year’s party could be followed by hangover. The state of the economy is also favourable for investing activity: the successful 2017 gave companies the chance to raise capital and loan terms are also reasonable.

A positive aspect of the study results is that this year 36% of the companies surveyed plan to invest more into equipment and machinery than they did last year. In Estonia’s case, a concern is that only 2% of companies plan to invest more money into R&D and 70% couldn’t say – these are the poorest indicators among the 35 countries covered!

If we look at Eurostat data on total R&D spending as a percentage of GDP, Estonia is nearly 50% lower than the European average. In 2016 (the most recent year for which data are available) Estonian R&D spending was 1.28% of GDP, the EU average was 2.03%, and the figures for Sweden and Germany were 3.25% and 2.94%. We have our work cut out for us in this Estonian centenary year.

Once every quarter, Grant Thornton International Business Report (IBR) surveys business people in 35 countries to find out their expectations about their country’s economy and their business. The data in the survey referred to in the article were collected from more than 2,500 executives in November and December 2017 . 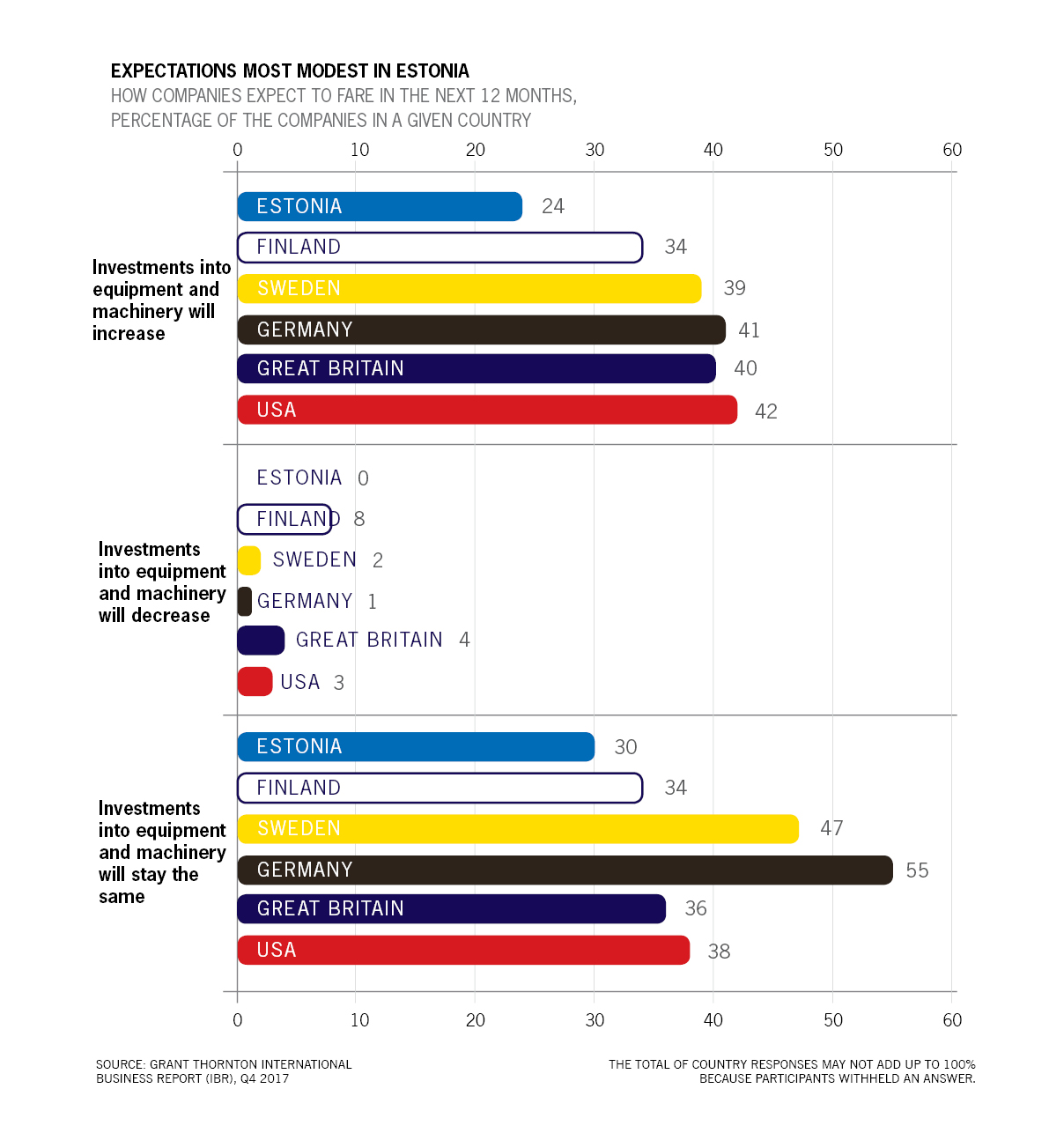