What are the factors that drive people to take on the responsibility required in senior management positions? It turns out that the biggest motivator for both genders is the chance to drive business strategy and effect change, but a good salary is seen as more important by women than it is by men.

In the second half of 2015, the professional services firm Grant Thornton studied 36 economies to determine the percentage of executives who are female and to find out what motivates people to work in such a post.

Overall in the 36 countries, there was not a single woman on the boards of one-third of companies. At one end of the scale, the Eastern European and former Soviet countries have the highest percentages of senior management who are female. For example, 45% of private sector directorships are in the hands of women, with the share being 30-35% in the Baltics. The reasons for the relatively high share of female senior management lie in the past: during the Soviet era, women had a high employment rate and the tendency continued after the USSR collapsed. The demographic situation also comes into play: both in Russia and the Baltics, women outnumber men in the population.

But back to the study results. In the businesses in the 36 countries surveyed, human resources directors were most likely to be women (almost a fourth), followed by chief financial officers (21%). But only 9% of CEOs are women.

For men, the second-most important motivator was belief in the company’s goals; for women, it was recognizing their own ability in coping with the work of a member of senior management. The role of money as a motivator had different weights in the case of women and men. 28% of female directors said that earning a bigger income after being hired as a director was important and 21% of men responded the same way. The female directors who responded said the reason that earning a high income was important was that if a company paid them a proper wage, they felt that their effort and difficult job were rewarded. Men tend to take good pay in these positions for granted, on the other hand. The increasing role of women as the sole breadwinners of families (e.g., if the children’s father has left the family) and the need to earn enough to support the family also come into play.

Looking at the results separately for each of the 36 countries, we see that the most important argument for Estonian female directors accepting their position was that it felt like the most logical next step on the career ladder (44% of respondents). It was followed by the opportunity to earn a higher salary and recognizing one’s ability (both 34%). On the other hand, earning a higher income was the most important argument for Estonian male directors (38%) followed by inspiring others, gaining new experience, belief in the company’s goals and the feeling that becoming a director was the logical next step on their career path.

We can ask: why is money more important for males than it is for women in Estonia? Does society still see men as the main breadwinners and does this put pressure on men to earn as high a wage as possible? Or do women see striving toward the top positions as a way of significantly improving their income (compared to working as a specialist) but they accept the fact that since the gender wage gap is so wide in Estonia, they will earn less anyway than do their male counterparts? 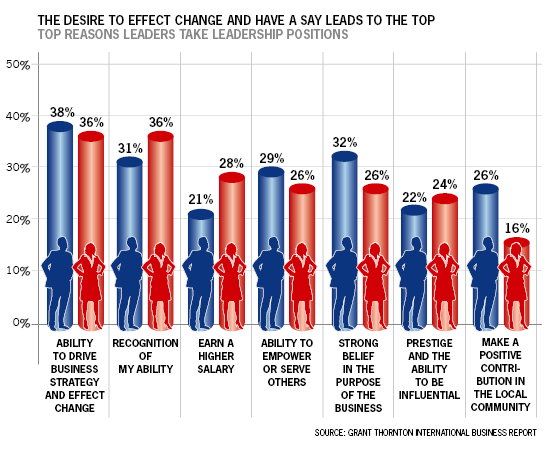