Is a new wave of Estonians emigrating for work about to begin?

Last year, Estonia had 12,700 job vacancies, which Statistics Estonia says is a nine-year high. Looking at the bigger picture, we should ask whether our already scarce workforce will not increasingly seek employment abroad, as a majority of industrialized countries are also suffering from workforce shortages. And it’s only the beginning.

International Business Report from the tax and business advisory service provider Grant Thornton shows that the lack of qualified workforce is becoming an ever-bigger problem. In Q3, 2,500 executives from 36 countries were surveyed and 38% of respondents said they felt the lack of qualified workforce was the biggest obstacle to the development of their company. The indicator is the highest it has been since 2003, when Grant Thornton started conducting the survey. Going down the list country by country, we see that 54% of executives in Estonia consider workforce shortage a major problem in terms of curtailing development, 30% in Finland and 47 in Sweden.

There have been attempts in Estonia to increase employment among the currently non-working population who are otherwise of working age and capable of working. Take the changes to the parental benefit system, which incentivize working during parental leave or the Unemployment Insurance Fund’s new tack of offering training and retraining for working people, not just the unemployed – people who have insufficient skills for staying on the labour market.

Certainly more emphasis should be laid on those who want to work but wish to do so part-time. Currently hiring employees with part-time workload is disadvantageous for employers from a taxation standpoint if it’s a lower-paid position. This is due to the fact that the minimum monthly level of social tax must be paid on the employee even if the person earns less than the monthly rate. Consequently, the monthly social tax rate should be reduced to promote hiring of people who want to work part-time. Nor should working pensioners be punished with a higher tax burden, as will unfortunately happen next year.

To ease workforce shortage – retaining existing employees and recruiting additional ones where necessary – companies both here and elsewhere are being forced to hike salaries. The survey starkly shows a record figure: we see that 78% of companies are planning to give their employees a raise in the next 12 months. Fifty per cent of companies in Estonia are planning to do so, 60% in Finland and 92% in Sweden!

One does not need to be an economist to see that soaring salaries will eat into corporate profits and thereby the capability to grow and invest sustainably. Companies in the world’s biggest economies – the US; China, Japan, Germany and others – have already lowered profit forecasts for the next 12 months. Furthermore, if profits are under fire, companies may start raising the prices of goods and services and this will cause inflationary pressure. It is currently very important that companies are able to retain balance so that rising salaries would not erode the funds meant for other investments.

Once every quarter, Grant Thornton International Business Report (IBR) surveys business people in 36 countries to find out their expectations about their country’s economy and their business. The data in the survey referred to in the article were collected from 2,500 executives in Q3 of 2017. 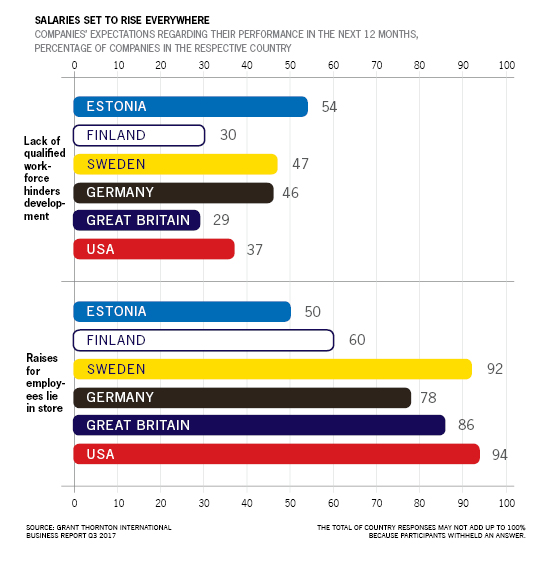 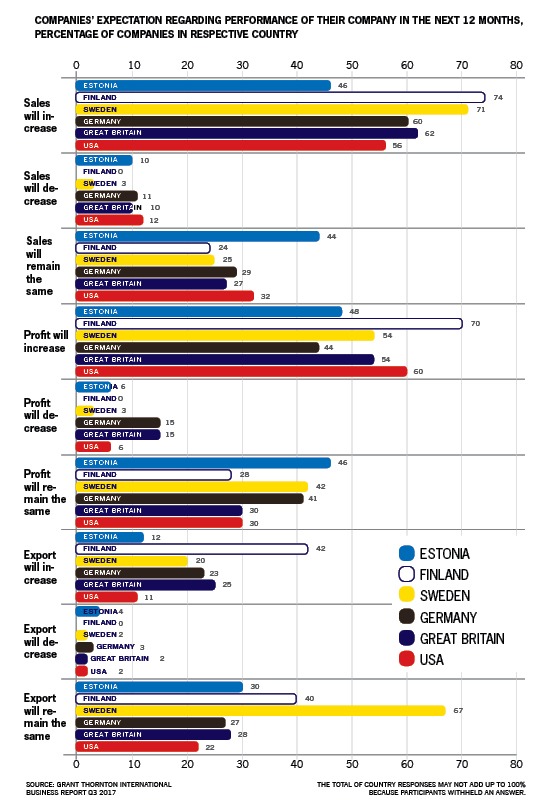