The principle of segregation of duties holds that various powers should be divided up among employees so that there is sufficient control and effectiveness of processes.

It isn’t wise to overdo imposition of any control, but unfortunately some organisations still put extremely extensive rights and responsibilities in the hands of a single individual, which could invite intentional fraud.

Fraud related to VAT returns is currently a salient topic in Estonia, and every VAT payer should think about whether such a scheme could happen in their own organisation.

A company received a tip from the Tax and Customs Board (hereinafter MTA) that their accountant is executing suspicious transactions involving VAT. As evidence, the MTA sends an Excel file to the company, showing that the accountant has allowed VAT refund amounts to be transferred to the account of other company related to the accountant.

The third company’s owner compared the amounts declared to the MTA with the transactions made by the company in the bank and it did not match up. Also in this case, VAT was involved. The right amount was declared monthly to MTA but transaction to the MTA was made in a bigger amount than declared.  The company owner made an inquiry, upon which the accountant explained that the funds were on the MTA prepayment account. The company’s owner still trusted her and did not check the balance in the MTA system. But at the same time the accountant required the payback of the overpaid VAT from MTA but inserted to the MTA IT-system her own company’s reference number. In the company’s accounting, the accountant recognized the prepaid balance as more than it actually was. According to the Prosecutor’s Office, a total of 20 companies fell victim to the accountant. A company from which close to 580,000 euros was embezzled sustained the greatest losses.

What rules to enact within the organisation?

Filing VAT declarations is a continuous process that has to take place in a stable and uniform manner. Accounting for purchase and sales invoices is related to VAT declarations; and in general, this is done in tandem with one or more accountants. It is difficult to apply the principle of segregation of duties in MTA IIT-system– the person filing/approving the VAT declaration can always change the declaration. A review can only take place retrospectively – a second employee checks the balances in the accounting programme and the declaration after it is approved. In addition, the right to submit the application for refund of overpaid VAT can be assigned to a person other than the ones in the foregoing process. But it only works like this in a big company where more than one person is involved in accounting. In a small company with one accountant, the whole process could be divided up between the senior manager and the accountant.

What must be kept in mind is that one can get carried away establishing rules – it isn’t unusual for control procedures to be so complicated that they get in the way of the activity itself. This is expressed most often in delays of paying invoices, as there is a long list of those who must endorse invoices.

In closing, none of us wants to think that the accountant profession includes many fraudsters. But it’s clear that the above examples prove that there is a risk. Also a characteristic is the fact that each year MTA exposes at least four accountants who were complicit in fraud[1].

That makes it particularly relevant for VAT payers to re-assess the risks related to refund of overpaid VAT and set forth how functions should be divided up between employees. Here are some risks that could be re-assessed: 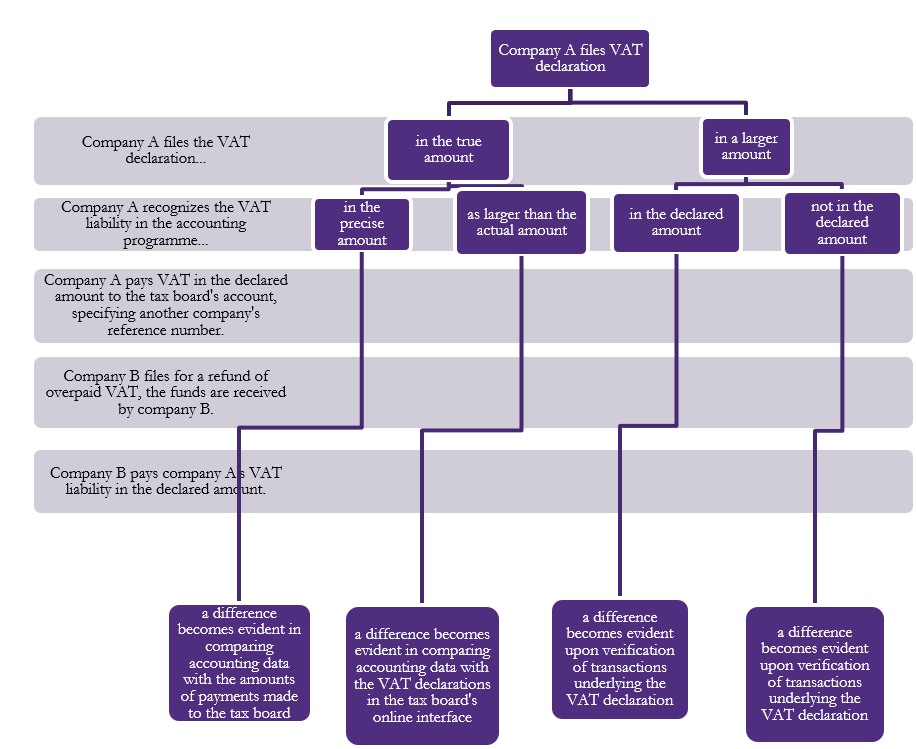