In early March, a conference was held in Tallinn where the low number of women in senior political and business positions in Estonia was discussed. Leaving politics aside, the percentage of management seats occupied by women at Estonian companies has been constantly increasing in recent years. Today 40% of Estonian management boards have at least one female member. That figure puts us third in the world!

This information is based on the latest global survey conducted by tax and business advisory firm Grant Thornton. We surveyed over 5,500 companies’ CEOs and other executives in 36 countries at the end of last year. The survey results showed that Eastern European and Asian countries had the greatest share of women in management board positions. Russia had the highest share of female executives, with 47% of executive positions are occupied by women. Estonia was third of 36 countries in terms of number of female execs (40%), and Latvia and Lithuania came in sixth and seventh (39% and 37%, respectively).

Who are actually the black sheep?

Looking at Grant Thornton’s previous studies, we can nevertheless draw a cheerier conclusion: each year, the number of female execs has grown slightly around the world. “Slightly” here means last year’s growth was 1 percentage point. If the current slow pace of growth continues, gender parity will be reached only in 2060.

Already now, we can say with pride that Estonia is a role model for other countries in number of female executives and our experience is worth emulating. I don’t agree with the oft-heard claim that women in Estonia face a glass ceiling and at some point being female is bound to be an obstacle on the ascent up the career ladder. Take my own experience: Grant Thornton Baltic, which turns 25 this year, recently expanded its partners and now three of the eight partners in our Estonian company are women. Essential criteria for becoming a partner were the desire to develop the company and time and knowledge for contributing to this effort; gender was not a criterion.

Why should the gender topic be treated in management at all?

I think that all companies that are looking to grow realise they will have to be more productive, innovative and open. Soft values must also be held in higher regard – without them, no modern organisation can be successful. Men and women are different and that is why their managerial methods and decision-making processes are also different.

For example, women and men see risks as being similar, but act in a different manner to manage the risks – women are more cautious and deliberate in taking steps to hedge risks. Putting these two sides together – rapid and boldly springing into action vs. deliberate planning – we can shape quality decision-making processes at a company. Diversity and different competencies are precisely the values that companies can draw on so as to enjoy success in complicated times and remain successful.

How to get more women into senior management?

Is one option gender quotas, which are highly controversial? I don’t think establishing obligatory gender quotas is a good idea for bringing women into senior management positions. It isn’t quotas that should help women become executives but rather their own initiative and commitment along with their skills and knowledge. More effective and important than quotas would be to change society’s attitudes; of course, this will take years. Among other things, women’s own attitudes should change, because sometimes paper chains of our own creation keep us from becoming leaders. A telling example of modesty is the fact that in 360 degree assessments, women often give themselves lower ratings than their supervisors and co-workers do.

Another important topic is the government’s family policy. The childcare opportunities and flexible work hours increase women’s options for returning to the workforce after having children. Estonia is moving toward greater integration between professional and family life, if we look at the most recent proposals for changing the parental allowance system.

By moulding attitudes and establishing corresponding policies, the government can create a suitable context system as a kind of incubator for women executives, but it is also important that companies themselves make an effort to develop corporate culture. This includes offering employees development opportunities regardless of gender as well as creating a system of mentors for grooming new executives. If there’s a will, then there’s a way – and the sky’s the limit!

The full version of the 2017 Grant Thornton study “Women in Business: new perspectives on risk and reward” can be downloaded here [ 1401 kb ]. 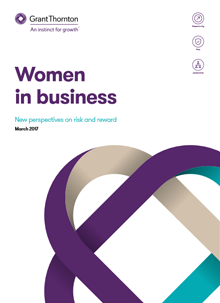